On the bank holiday weekend in August we had our annual summer camp at Hawkwood. It was not so well attended as last year, but those who came had a great time. The tents got
pitched up at the bottom of our hayfield by the stream.
The evening started with a bring your own BBQ. There were delicious burgers, sausages, vegetarian burgers, sweetcorn, courgettes and other veggies on the barbecue, as well as potatoes, which were harvested the same afternoon on the farm day. We extended the meal into a glorious sunset and finished at dusk with cake. 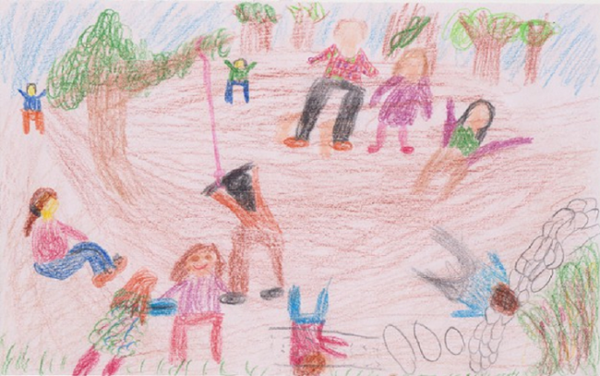 As it got darker all the kids and many of the adults wanted to see the badgers at Hawkwood. They set off to the Hawkwood College compost heap where one can usually observe badgers helping themselves to the leftovers of Hawkwood kitchen. Maybe the group was too big or too noisy: none of them appeared. The badger observation turned into a night walk along wood field with two adjacent badger sets which was fun.
Back at the fire the evening ended with a joined story. Everyone contributed one sentence and as it made the round several times the most wonderful story evolved of a man who walked his dog and got into the most miraculous adventures. 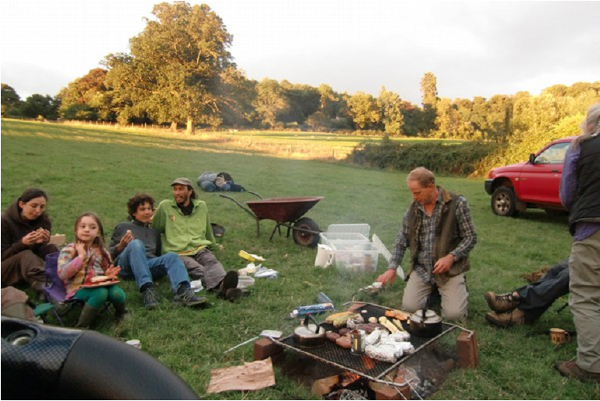 Now it was time for the kids to go to bed and for me to go home. On my way back up the hill the buggy died on me. Mark and Bruno came to rescue me and wheeled me all the way up in a wheelchair.

The next day was spent with games in the fields and the woods. I wasn't there but Rowan Hardiman drew a picture (seen above)of the swing in the woods, the drystone walled shelter they builtand the path leading to it.
–Ute Schlossmache