These vegetables belong to the Cucurbitagenus, in the family of plants that also includes melons and cucumbers, all fruits and vegetables that love the sun and summer. They originated in America where they were very important in the cultures of the native peoples there. The names pumpkin and squash are quite interchangeable, but we tend to refer to the Halloween-type squashes as pumpkins and all of the others as winter squashes.
Courgettes and marrows are in the species, Cucurbita pepo. They have been bred from the same plants to produce different varieties for different uses. So if left on the plant the courgette will grow to form a large marrow (but it is best eaten as a small fruit), and conversely the marrow can be picked when it is immature but is best left to grow to a large size. We are also growing custard squashes or patty pan (white scallop shaped squash) this year. They also belong to the C. pepogenus and are classed as a summer squash, one that will store for a month or two only. 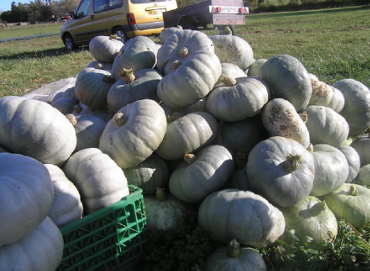 Most of the other squashes that we grow are winter squash that belong to the species C. maxima. We are growing about 15 different varieties this year. They include many varieties such as ‘Crown Prince’ (the big bluey grey one) ‘Uchiki Kuri’ (orangey red onion shape) and ‘Buttercup’ (small green squash).
They will all store for some months over the winter. It is this species that includes the huge show squashes. The largest squash was grown in the USA and weighed in at a mighty 911kg. I think that the largest we have grown was about 8kg. We are growing some butternut squashes. These are normally quite difficult to grow in this country as they require plenty of warmth and sun to mature properly. Every year they turn out to be quite disappointing and every year we try again. Maybe this year will be the one.
Anyway, it does look as though we will have plenty of squashes this year. They need to be stored in a cool (but not cold), dry place. We don’t really have good facilities for storing them on the farm so we may give them all out to you in October when we harvest them.
That way you can store them in the best possible place – your house – and you will be able to enjoy looking at them for awhile before eating them.
–Farmer Mark Harrison