Stroud Community Agriculture is launching a new project! The four-acre 'Starter Farm' will be a springboard into sustainable agriculture for new growers from non-farming backgrounds.

The starter farm is an educational project, aimed at helping people on their way to becoming organic growers. Mentoring, a guaranteed market for produce, and all the necessary infrastructure for a market garden, provide a supported environment for those with some experience to take the next step towards setting up their own small-scale agricultural enterprise. Each starter farmer (or pair of starter farmers) will take the plot on for a two or three year period, leaving with the skills, experience and confidence to thrive elsewhere, and leaving space for a new entrant grower to step into their shoes.

Stroud Community Agriculture is launching a new project! The four-acre 'Starter Farm' will be a springboard into sustainable agriculture for new growers from non-farming backgrounds.

SCA is a thriving community farm created twelve years ago, supplying biodynamic vegetables and organic meat to 220 households in the Stroud area. With the farm going from strength to strength, and a waiting list for new members, it's time for a new initiative – an offshoot of the main farm where young growers can train, learning vital practical and business skills which will help them on their way to running their own eco-friendly veg-growing enterprises. Vegetables grown at the new site will primarily be supplied to SCA, so yet more local people can benefit from their weekly share of delicious seasonal produce. The Starter Farm aims to cater for fifty new members.

The average British farmer is now 59 years old, with conventional farming declining in popularity, partly due to its dependency on chemical pesticides, herbicides and fertilisers. Who will provide the locally-grown, chemical-free produce that will feed our future? The rising generation of farmers are here – but they need a bit of help. In recent years, there has been an upsurge of interest in small-scale sustainable farming in young people from non-farming backgrounds. Many volunteer on organic or permaculture-based smallholdings, or undertake an apprenticeship (such as the popular Biodynamic scheme whose participants include Ruskin Mill and SCA). A great start – but how to take the next step? For many just starting out on their journeys, the barriers to accessing land and markets are too high.

All over the UK, starter farms are springing up to meet this need. These intermediate structures allow fledgling growers to test their wings in a supported environment, giving them the best possible grounding with which to face the challenges of today's food system.

The starter farmers have begun work on the land! There is now water on the site, a cropping plan established and seed ordered... Muck-spreading, ploughing and cultivation work will follow shortly.
Sylvie Planel (a former Ruskin Mill apprentice) and Clare Whitney, both interns at Stroud Community Agriculture, provided the initial impetus for the Starter Farm project, and are the first 'starter farmers'. Taking on the land for a three-year term, they'll be growing independently for the first time, with some mentoring from the SCA team. A guaranteed market for their goods will give them the secure base to develop their gardening expertise, with the potential to expand to new markets as their confidence grows. At the end of their term they'll set out to establish their own enterprises, taking their newly-gained know-how and confidence with them – and handing over the Starter Farm for another entrant grower to step into their shoes.
SCA has successfully raised £7000 for this project, donated by the
Summerfield Charitable Trust and the Sylvia Waddilove Foundation. 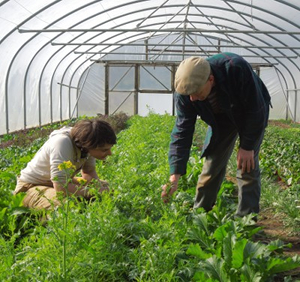 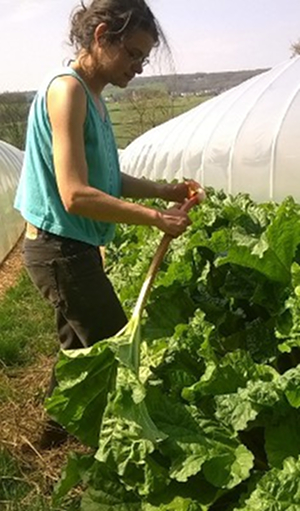